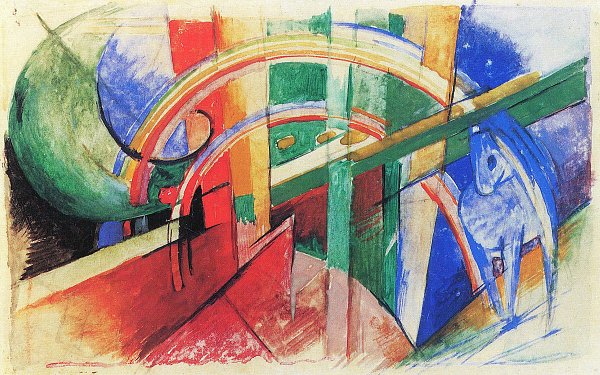 18 million dollars was paid in November 2007 for Franz Marc’s “The Waterfall (Women Under a Waterfall)” from 1912 at the New York auction house Sotheby’s – a record sum for the German Expressionist.

Thus the fame and popularity of Franz Marc (1880-1916) is beyond question. With his animal depictions of dogs, cats, deer, cows, but especially horses, he wrote art history:

He quickly separated from the traditional painting style of the Munich Academy, of which he was a member from 1900 to 1903. The trigger for this was a trip to Paris in 1903, where he came into contact with the late impressionists Vincent von Gogh and Paul Gauguin. The impression these pictures left on Marc was enormous – a fact that also affected his work in the following years.

But Marc was still searching for his own style of form. Thus he began to reduce the representational to the essential and to slowly but surely detach himself from the natural colouring. The French, revolutionary Fauvists with their expressive works around Henri Matisse also had a not negligible influence. Marc’s self-explanatory goal was to portray the inner, spiritual side of nature. The world was not to be depicted from the human perspective, but from the animal’s eyes. The aim was to explore and depict the soul of the animal. Form and colour subordinated themselves to this goal, the pure expression. 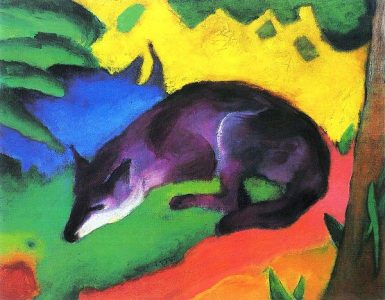 His theoretical examination of art, art-political activities and writings also enjoy a high status today. His probably most important work was the almanac “Der blaue Reiter” (“The Blue Rider”), which he published together with Wassily Kandinsky. The artists’ association of the same name around Paul Klee, August Macke, Gabriele Münter, Alexej von Jawlensky, Wassily Kandinsky and Franz Marc became the driving force behind German culture and a symbol of Expressionism in Germany.

From 1912, the influence of the Italian Futurists with their wild, energetic pictures and Robert Delaunay’s Orphism (Orphic Cubism) also played a major role.

Thus Franz Marc was more than a painter of blue horses: in 1914 he began to detach himself more and more from the object – as did other expressionist artists of his time (e.g. Kandinsky). He dissolved the animals into formulaic shapes and thus increasingly created abstract paintings. It is therefore all the more tragic that his importance as a pioneer and thinker of abstract art seems to be forgotten among the many reproductions from the years 1911 and 1912.

In 1914 Franz Marc volunteered for military service. The loss for German and international art is unbelievably high when he fell in 1916 in Verdun, France, at the age of 36.